Speaking Truth to Power in the Music Industry 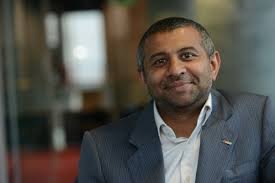 In 1997 Ammo Talwar, MBE founded Punch Records and remains CEO today. He is also Chair of the UK Diversity Task Force for the music industry. I asked Ammo to describe how his business got started and what it looks like now.

'I shouldn't be working in the music industry. I graduated as a civil engineer and as a youngster I wanted to build roads and bridges to connect communities. When I graduated I was designing doors for prisons and hospitals. My brother used to manage an artist in the early 1990s called Apache Indian who had a few famous tracks, "Boom Shack-a-Lak" was one. He was flying to Japan and Jamaica for reggae festivals. I wanted to do something like that but I didn't know what. It got to a stage where I was getting frustrated and I thought I'm a good Indian boy - I'll open a shop. It wasn't a traditional corner shop or Asian shop. It was a record store. For the first two years, I didn't really know what I was doing but I had a lot of help from colleagues, friends, the community and DJs.

We used to sell Beethoven, Oasis, Public Enemy but we couldn't compete with larger stores. We lacked that competitive edge. So we became more specialist and focused on black music. We had a lot of reggae, funk, jazz, hip-hop and a lot of soul. In the mid to late 1990s, we realised that music was changing. Kids were making records on Sony PlayStation, then post-millennium, there was a thing called Napster where people were downloading for free. It was the beginning of the digital era.

By 2003-2004 we had pivoted the business to working in schools, colleges, hospitals, prisons, looking at youth, looking at music, looking at curriculum. So when our record store doors closed in 2004 we were already working with music teachers and secondary schools, predominantly Key Stage 3 and helping to devise what the new music curriculum would look like. That's really how the business changed and morphed into something else.

We're based in Birmingham which is a diverse city with 43% non-White from the latest statistics. We were really energised by the notion that some of the arts and music venues weren't reflecting the new sounds of contemporary Britain. We set up a festival in 2006 and in 2008-2009 we started looking at commissioning work across the city. That's how the business diversified further. Making sure things are fair, that the community has access to the things that are exciting and that we're reflective of the area that we work in has always been a bit of a thread flowing through the company.

We believe the evolution of music will move on to something else soon. We have to be reflective of modern society, move with tech, with new communities. It's looking at things from a broad perspective and asking, "What do people in this area need right here, right now and what are our values?" Being reflective of both of those is important to the business'.

I asked Ammo to tell me about his role as Chair of the UK Diversity Task Force and what the task force wants to achieve.

'UK Music is the umbrella organisation that talks to government on behalf of the UK music industry. UK Music represents unions, trade bodies, labels and music managers. The Diversity Task Force has been set up primarily to look at what we are doing to make sure that diversity sits at the centre, middle, and top across the trade bodies. It also develops, shapes and sharpens policy stemming from equalities legislation.

We work across all the protected characteristics. I sit on the main UK Music board with the chairpeople and CEOs of the trade bodies. I also co-chair the task force with Paulette Long. It's a group of us that want to create not just a fairer society, but we want to make sure that we put systems and legislation, and we implement procedures, policies and frameworks, so people feel that music and the music industry can be for them.'

I asked Ammo what challenges they are seeing within the music industry as it tries to be more diverse and more inclusive?

'The music industry generally thinks it's quite diverse. From a workforce perspective, it's got some work to do. The challenges are around understanding where accountability and responsibility sit. In big companies, diversity is devolved to the head of diversity or that department over there. We want to make sure that there is a real sense of accountability and that a real, well thought out strategy is owned by someone and given proper resources.

Other challenges are gender and ethnic pay gaps. That's a long-term change. Current legislation says only the companies that employ more than 250 people need to publish this. We want to reduce that to 50. We want more people to be open and transparent about their gender pay gap. We know there are not enough diverse voices at senior and exec level. In the boardroom, we know it tends to be white, middle class, heterosexual, able-bodied if I can be so blunt.

We're not saying these individuals are bad people, or they do not want to change policy, but we're saying there is an echo chamber in most boardrooms. What we want to do is dismantle that in an authentic, respectful way so the new voices can be heard.

I wondered what Ammo's thoughts were on encouraging senior leaders in the industry to take more responsibility and not just pass accountability on. I asked him how he would make sure the chief executive is walking the talk when it comes to inclusivity especially with so much other stuff on their plate currently having to navigate businesses through the choppy waters of Coronavirus?

'You're not a CEO unless you can handle some pressure. That's the first thing. Secondly, I come back to the first point that I mentioned, we have to identify who's accountable. It has to sit at the top table. It has to be the chairperson, the board of governors, the CEO. If there are problems accountability has to sit with the boss. It's really simple. Responsibility can be delegated, but if accountability doesn't sit with the CEO amongst all the other responsibilities, then it won't work.'

We talked about the RACI index which stands for Responsible, Accountable, Consulted with and Informed. When I wrote the chapter on this book I realised it's important to go back to the basics sometimes and understand the difference between being accountable for something, which is what the chief execs should be doing and who's responsible for the delivery, which could be a Diversity and Inclusion Manager. Ammo's take on this is a tiered system with a few hoops that have to be got through first 'otherwise, there's no point in even talking about diversity.'

Ammo says of his approach, 'The first stage is accountability. If you can't get past that, it's not going to work. My second hoop is strategy which means time, resources and energy, and that often means money. Now, if you have accountability with strategy and the resources to deliver, we can talk about diversity. If you don't, what happens is it'll get devolved into something so small, nothing will change. We're talking about whole system change, not a micro-movement.

When I say systemic, I want to explain what I mean because it's a word that's used a lot. For me, systemic change covers the institutional, structural, interpersonal and internalised. Institutional is where things in an organisation have reinforced racist or biased agenda standards. Structural covers the different layers of these processes across organisations that are collectively compounding the problem - I'll use the Home Office and the police and the Windrush scandal as an example of a structural, systemic problem.

Then it goes further into the interpersonal behaviours, things like microaggressions. So conversations like, "Hey, your beard looks a little bit scruffy. Can you change your dreadlocks and just put them up?" And the fourth thing is the one that no one wants to talk about, the hidden thing, which is the internalised, the reinforced, the unconscious.'

It was great to hear Ammo breaking down the systemic challenges that need addressing across four different domains like this. Although I think unconscious bias is a thing, I would rather look at it within processes and systems. When people have said to me, "Well, we've put on loads of unconscious bias training for our employees. We've ticked that box." And I'm like, "Mmm, yeah, that's not going to help."

I reflected that privilege seems to be one of those topics that people struggle to talk about. Some might feel guilty about their privileges, and some are in denial that they've got any. It’s true that we do need to talk truth to power and acknowledge that privilege is a thing. We've got earned privileges and we've got unearned privileges.

Ammo agreed. 'We mustn't negate that, in every single protected characteristic, there's often privilege. We have to just be upfront and seek the truth, and once we have a safe space to be who we are and say the things that we care about, then we can move forward. I also think it's really up to CEOs and senior execs to set culture. I think there's something magical about getting the best out of individuals rather than trying to control the individual. I think we're moving more towards getting the best out of citizens rather than putting pressure on them.'

This is very much my line of thinking about the inclusion world. It's all about allowing people to come to work, be themselves so that they can do their best work possible which enables businesses to grow. This led me to my last question to Ammo which was what does inclusive growth mean to him?

'It's quite a fashionable term, inclusive growth because everybody wants growth. It can't just be for the 5%, the corporate sector. Inclusive growth means looking more broadly at the community and society that you live in. It could be a city, it could be a village, it could be a town. Growth is measured in different things and only some people measure it in wealth. I think there's something about saying "Well, collectively, we want to grow together, so the ecosystem doesn't feel too skewed." So we're including multiple sectors, communities, spaces and we take people along with us on the journey of growth.

Take a city, I'll use Birmingham as an example as I live there. We have 1.1 million people. The financial sector is based in the city centre. Inclusive growth for a city like Birmingham means making sure that the financial sector understands the other industries in the inner and outer city. Then if we grow, it's not just the city centre and the bankers that grow. It's the citizens, the people that pay their taxes that grow with it, and that's for me what inclusive growth means.

To get in touch with Ammo Talwar tweet @punchrecords, email ammo@punch-records.co.uk or visit his LinkedIn page.

Value through Vulnerability Podcast Interview
The discipline of project management ensures the successful implementation of organisational diversity and inclusion.’ — Loraine Martins, Director of Diversity and Inclusion at Network Rail
Inclusivity: you only find out what you need to know by asking people about the problem