On 25 May there was yet another incident of police brutality where George Floyd (an African-American man) was killed by police officers in Minneapolis. His killing was captured on video and we have seen a wave of protests and outrage against racial discrimination unfold in cities in the US and across the world.

Workplaces play a really important role in challenging societal inequalities. Workplaces educate employees on creating a fairer society, which they take back to their families around the dinner table after work. They bring diverse people together under one organisation to collaborate and work towards common goals, visions, missions and create safe cultures where people feel like they belong. Very often, our workplaces are much more diverse than our circle of friends and family.

I was really encouraged to see emails come out this week from a couple of business leaders. They are great examples of how workplaces are challenging inequalities in society. 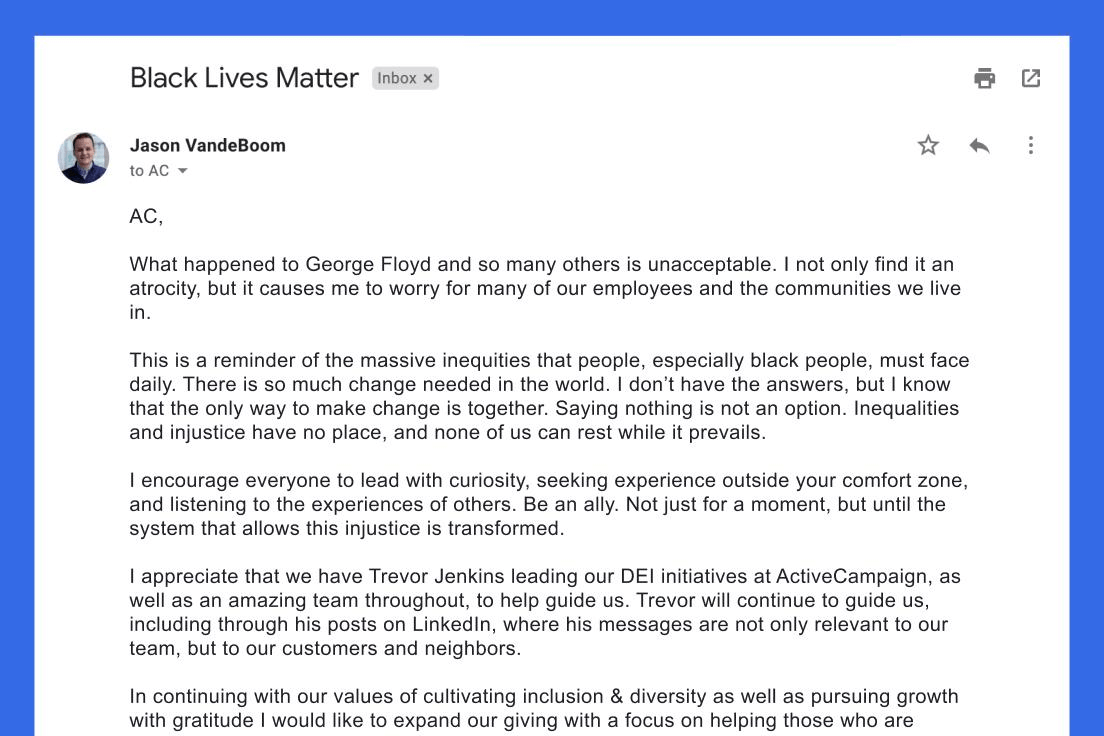 First, there was a message from the CEO of Active Campaign (the marketing software company). CEO Jason VandeBoom said that what happened to George Floyd was an atrocity and that he worries for many of his employees. He was reminded of the massive inequalities people face daily in society. Inequalities and injustice have no place, and none of us can rest while it prevails. Jason encouraged his employees to lead with curiosity, move outside their comfort zone and listen to the experiences of others. He wants them to be an ally. Not just now but until injustice is transformed.

Active Campaign employs Trevor Jenkins who leads on diversity, equality and inclusion initiatives at the organisation. Trevor plays a crucial role in supporting the business, its employees and customers. But it’s really encouraging that their chief executive, Jason, actively leads on cultivating inclusion and diversity — talking publicly about it — and other chief executives need to follow in his footsteps.

The 2nd email came from Hayden Brown who is the CEO of Upwork, in which he said:

Within Upwork, we are committed to creating a safe environment for honest conversations about race, these painful acts, how we can support each other through these traumatic crises, and how we can effectively upend the chronic racism that many of our team members experience every day. We recognize that we also have much progress to make, and we have committed to take action toward building a more diverse and inclusive workplace

Hayden talks about the practical steps they are taking to create a more inclusive workplace. Upwork also employs Dr. Erin L. Thomas, vice president of diversity, inclusion and belonging. But just like Jason at Active Campaign, Hayden is taking personal accountability and responsibility for inclusivity at Upwork. He wants to:

“help other companies uplift their Black employees to pave the way toward cultures that nurture excellence in all of its forms”.

Hayden ends his email by saying that at Upwork, they are channelling their outrage into work, to actively build a company and a society that Black people deserve.

I want to share three practical things I believe businesses should be doing to challenge racial inequalities in society. As I stated above I really do believe that employers and workplaces have a pivotal role in this.

Lead from the top. Be a bold leader.

Chief Executives must publicly state what their organisation is doing to improve inequalities in society (just like Hayden and Jason above). They need to reiterate their organisational values. If you say that you believe in diversity, equality and inclusion then your actions need to be congruent with these values. By all means employ a head of diversity and inclusion or ask your HR director to take the lead on EDI activity but CEOs need to walk the talk. They need to be accountable for the inclusive culture in the organisation.

Talking about race can be difficult. Sometimes we worry about saying or doing the wrong thing and ‘putting our foot in it’. Which leads to inaction. As somebody with a disability I have faced this many times where people are too embarrassed to talk to me. Therefore, they avoid me or end up making embarrassing mistakes (like patting me on the head). Create safe spaces/networks where employees from a black, Asian or minority ethnic background can talk about their day-to-day experiences at work and can speak up about incivilities they face during the working day. But don’t allow these networks to become echo chambers. Empower white employees to join the conversation, become supporters and allies. We are in this together. 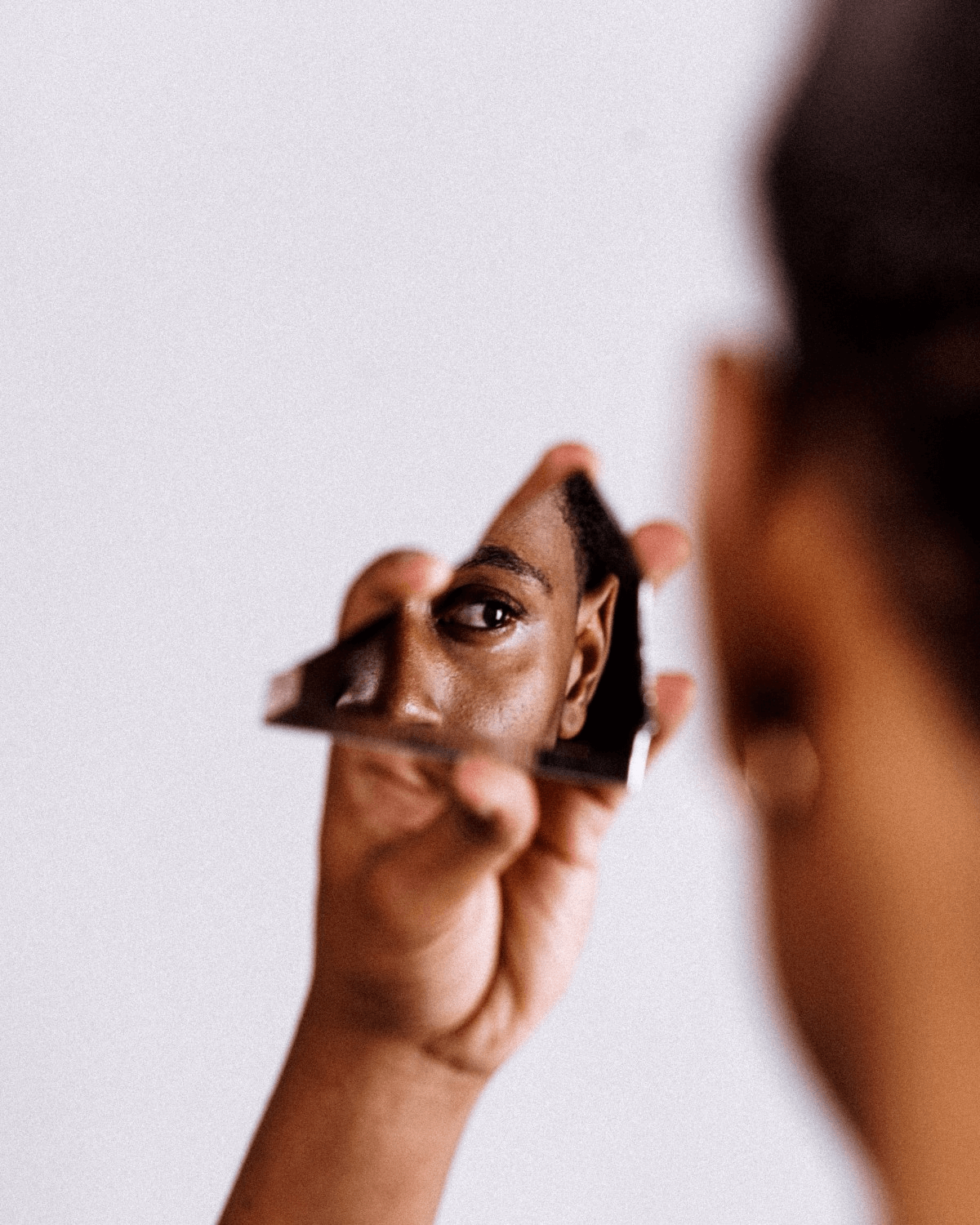 Hold the mirror up for managers

So you have a chief executive who is taking personal responsibility for inclusivity in the organisation. You are getting more comfortable in talking about race as an organisation. However, it’s the middle manager layer that gets overlooked and they play a crucial role in embedding an inclusive culture.

It’s really important that you collect examples of how people from ethnic minority backgrounds are experiencing the workplace. For example, instances of micro-aggression’s, harassment, privilege, unconscious bias et cetera. These personal stories need to be played back to managers so that they understand the behaviours that are happening in their teams and on their watch.

Now that you’ve raised the level of consciousness for managers you need to give them the tools to eradicate the behaviours that do not create an inclusive work environment. This could be coaching on how to have difficult conversations with people, for instance.

I hope the above has given you some ideas about what your organisation can do to create a more inclusive workplace for people from an ethnic minority background. Or perhaps you are already doing the above and this helps validate your thinking and strategy.

Ethnicity
Value through Vulnerability Podcast Interview
The discipline of project management ensures the successful implementation of organisational diversity and inclusion.’ — Loraine Martins, Director of Diversity and Inclusion at Network Rail
Inclusivity: you only find out what you need to know by asking people about the problem